Oops… She Made it Again! 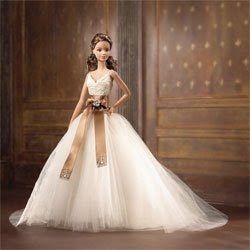 How much are you willing to spend for a wedding dress?
Did I hear over P2 million pesos?

You would probably ask: Who in her right mind would spend that much for a dress that would be worn only once.

And your next question would be: Who in her right mind would dare charge that ridiculous amount of money for a dress?

I know someone who would.

And she is in her right mind. And a brilliant one.

Diane was born and raised in the southern city of Cebu. Her family owns a business chain. But she could not imagine herself behind a shop counter waiting for customers while polishing grandma’s earrings, broken necklaces and stolen Rolexes.

After Diane got engaged, she had to choose from mountainous piles of original wedding dress designs before she finally settled for one. This sparked her obsession with designing wedding dresses.

After borrowing money from her mother, Diane and her husband put up a modest fashion house. Within six years, Diane’s extraordinary talent has made her one of the leading bridal fashion designers in the country. Her dresses can be found only in the most expensive stores. Or if you’re lucky, on eBay.

Diane’s designs stand out: classic yet hip, stylish yet functional, romantic yet practical. It is no wonder that the biggest celebrities flock to her shop for their dress for such big events as weddings and movie award nights. One of them was an award-winning actor who commissioned Diane to do his bride’s wedding dress in 2004. The resulting wedding dress got rave reviews from fashion critics.

With only three months prior to the wedding date, Diane mobilized her five-woman team to full-speed mode. After all, the young female singer was not an ordinary client. She was paying the equivalent of about 1.5 million pesos for her wedding gown alone. Well, this is fairly a reasonable price for a wedding dress considering that another client had just paid Diane the equivalent of over 2 million pesos for a single dress.

As expected, Diane and her team finished all the dresses in time for the wedding the next day. Upon seeing the dresses, the young female singer exclaimed, “The dresses were a dream. It was all exactly as I wanted.”

You probably must have guessed by now that the young female singer who had her wedding dress made by Diane was then the bride of aspiring singer Kevin Federline.

Of course, we all know that the 22-year old former bride of Kevin Federline was then young female singer Britney Spears.

With this, Diane duplicated her 2004 feat when she was commissioned to do the wedding dress of the bride of an award-winning actor who is also named Kevin: Kevin Costner.

We also know that Diane did the wedding dress of Alicia Silverstone, Natalie Imbruglia, Lea Salonga and several other famous names.

Just watch the celebrity interviews during the red carpet show of any big showbiz event (the Oscar, Golden Globe, Emmy, Grammy, etc.) and you will be amazed at the impressive list of big-name stars who are wearing Diane’s creations. Oftentimes, Diane’s dresses are worn by more stars than any other designer.

Pinoys couldn’t be prouder of this Pinay.

And Diane is a true Pinay who was born and raised in Cebu City.

And it would have been a big loss to Hollywood had Diane chosen a less stressful life behind a shop counter waiting for customers while polishing grandma’s earrings, broken necklaces and stolen Rolexes.

Because Diane is the heir to the Lhuillier pawnshop business.

And most Pinoys probably know the rest of her truly amazing conquest of Hollywood.
.
Image from luxist.com
NEXT: The Dethroned Princess Who Built Her Own Palace in Ayala Alabang (Via Remote Control)
Posted by Nick at 8:00 PM

Sunshine Cruz wore an Eric Pineda during her wedding. It was Assunta da Rossi who wore a Vera Wang gown.

i absolutely didnt know this.

you write well. it doesn't come like a cheap late sunday afternoon showbiz talkshow scoop. you tell it in a positive way.

will be looking forward to more stories.

You know what? When I read your blog, I make the guesses as I go along and--when at the end of your post I see that my guesses match the celebrities you write about, I feel like I won the quiz bee :))

i was wondering why Diane when it's Monique doing a marquee in my head. turns out it's Diane Monique. what an ending! can't wait for your next installment.

i was wracking my head as to who the singer was. =) i had fun with this one.

Hey Anonymous.
Yes, you're absolutely right.
I wish though that you gave us your name. Please do so next time. I would be glad to know who you are.
Thank you very much.

You're welcome Nick! :-) I was just told by someone that those were the right people. I really didn't know.

I think I already have an idea who the next one is...HAHA...had a ball reading all the other stories as well....

Hey Anonymous.
You still did not give your name.
I'm sure you know who the subject of my next story is. My description gave her away. But that's not really the point of my next story. Intrigued? Watch out for it.
I'm glad that you enjoyed my other stories. And I really appreciate your feedback.
Thanks.

no, don't leave out the names, that's the novelty of your site. hehehe

the moment you mentioned diane was raised in cebu and "could not imagine herself behind a shop counter waiting for customers while polishing grandma’s earrings, broken necklaces and stolen Rolexes", that's Monique Lhuiller.

I was at first wondring why you called her Diane but you answered my question at the end of the post.

and of course, only one pop star was caught with her pants down and no panties underneath...

Hey Jo.
Why did you delete your other comment?
On second thought, I think I know why.
Thanks.

ok, i was hoping to try one kaso i don't have the facts. but it seems you have the inside scoop for most of the stories. anyways, kudos to you! galing.

i'm so excited on your next story! i have the feeling i should know about it, or knew about this before, but i just don't remember it. hahaha! =) can't wait! Ü

another amazing story from nick.. wow. i was waiting day after day.. too bad i was confined in the hospital the day you posted your new entry..:( arghh... anyways, i really enjoyed this one..

i deleted it due to a lot of wrong spellings, hahahaha!

I've read all your stories. It is very well written. You used the appropriate words and ambience for every entry. The facts are quite precise as well. You must know many Philippine influentials to have put true parallelisms together. Please write some more. I've referred this blog to so many, and they all felt the same way I do.

im looking forward for the next one.

Hey Kievin.
Thanks for your kind words.
I'm glad that you like my posts.
I've got more stories. Watch out for them.
Why don't you write that story about a band vocalist? I'm looking forward to reading about him in your blog.
Thanks for dropping by.

Jo said...
You know what? When I read your blog, I make the guesses as I go along and--when at the end of your post I see that my guesses match the celebrities you write about, I feel like I won the quiz bee :))

Hey Shai.
I'm glad that you were having fun while reading my stories.
Thanks again.

I knew it was Monique when I saw the Barbie pic.

I really enjoy this site! Keep it up. :D

Hey Anonymous.
There's really no reason to insult the readers of this blog. And you don't have to read these posts if you don't like them.
Thanks for dropping by, anyway.

Hello Nick!! I am so glad that you finally brought this blog back to life!!! I received several through email without a source and I posted them all on my blog because of how amazing the stories were. Someone visited my blog and pointed me to your site and I linked it up as the SOURCE.

However, a couple of months later, it was removed. I was so disappointed. But now, I am ecstatic to see that you continued writing! Love love love it.

Can I link you up?

hi! i came across this "pinoy untold stories" as a forwarded email. i'm so amazed and amused by the untold stories by the filipinos. very well-written sir! i would also like to add for those tube addicts: monique lhuillier also made the wedding gown of lana lang in smallville worn by kristin kreuk and the wedding gown of Kate Walsh (Grey's Anatomy) when she got married in real life.

Some facts about Monique:

1. She spent most of her teens in a boarding school in Switzerland.

2. Aside form owning a pawnshop and jewelry chain of stores, they have a chicken farm, mango orchard, orchard, restaurants.

3. Her parents shops during the weekdays in the malls here in Cebu. They don't have an entourage and are very polite.


Monique was taught that hardwork and perseverance pays! Thanks to her Dad Michel and her mom Amparito who happened to be Miss Caltex during the 60's or 70s.

hi! i just finished reading posts 1 to 12. this blog is so addicting! i can't wait for the next post. keep it up!

i like your posts, just would like to leave a comment re. Monique Lhuillier. she was introduced in Project Runway as French designer. As if she's not proud to be Pinoy