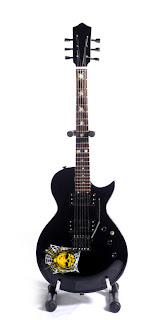 He was born on a Sunday at St. Luke’s Hospital.

He formed a band named Exodus.

But he is not religious.
.
Nor is he a saint.
Just a hero.
.
Guitar hero.
.
This guitar hero was born at 3 in the morning on November 18.
His mother was a Pinay government employee while his father was a seaman. He has two siblings: Rick and Tracy.
When he was 11 years old, he took piano lessons. But he did not like the teacher. So he quit.

His older brother, Rick, had a vast collection of guitars and records. When he turned 15, he got himself his own guitar. Although it was an inexpensive one, it sparked his passion for playing the guitar.
.
He always played Jimi Hendrix songs in his guitar. He is obsessed with Jimi Hendrix. He wanted to be like Jimi Hendrix. Yes, Jimi Hendrix was his guitar hero.
His dream was finally fulfilled when he got a more expensive guitar. But he did not have a good amplifier. So he took a job as a dishwasher at Burger King in order to buy one.

This was when he formed the band Exodus with his friends.
A year later, while he was taking private guitar lessons, he received an unexpected call from a popular rock band. The band was about to record their first album but they wanted to fire their lead guitarist who was giving them problems. So they wanted him to try out as the band’s new guitarist.
After his audition, the popular rock band offered him the position of lead guitarist. But it was April Fool’s Day. So he thought it was a joke. It was not a joke.

And the rest was history.

He is a vegetarian and he likes to collect horror movies and movie memorabilia. He loves to collect taxidermy and he even owns a stuffed two-headed sheep and a stuffed monkey. He also loves animals and he keeps a motley of pets at home: two dogs named Darla and Hoku, several cats, two horses, a llama and a goat. Recently, he has discovered a new passion: surfing.

He drives a Land Cruiser, a ’55 Dodge Coronet and a mountain bike. He had a Porsche. But he pawned it in a bet. He lost.

In 1995, as a Christmas gift to himself, he got a tattoo wrapped around his belly button which says: “Made in SF 11-18-62” This is in addition to the hot rod flames he already had in his thigh.
.
After his first marriage with Rebecca ended in 1990, he married Lani in 1998. In 2006, they had a son whom he named Angel Ray Keala. Two years later, they had another son: Vincenzo Kainalu.

He confessed that he plays his guitar at least 362 days a year.

He was ranked number 11 on Rolling Stone Magazine’s ultimate list of 100 Greatest Guitarists of All Time. His guitar hero, Jimi Hendrix, took the top spot.

The recognition accorded him by the Rolling Stone Magazine was such a huge honor. Because it ranked him way ahead of some of the best guitar players who ever lived. This only mean one thing. He is a better guitarist than all of the following great guitarists from the greatest bands in history:


Plus many other great guitar icons, past and present.

He took private guitar lessons from master guitarist Joe Satriani. Remember the name? Yes, Joe Satriani was the man who composed If I Could Fly which was allegedly the original song from where popular British alternative rock band Coldplay (lead by vocalist/pianist/guitarist Chris Martin who is the husband of Oscar-winning actress Gwyneth Paltrow) copied its Grammy award-winning song, Viva La Vida. If you listen to both songs, the similarity was indeed uncanny.

He was the first ever inductee into the prestigious Guitar World Magazine’s Hall of Fame.

His band has sold more than 90 million records worldwide.

Early 2009 marked another milestone in his amazing career as a master of the guitar. He became a certified Guitar Hero.

Because his band became the subject of the second in a series of Guitar Hero video games.

He is a real Guitar Hero.

His name is Kirk Lee Hammett.

And he is the lead guitarist of the heavy metal band, Metallica.

And yes, his mother is a true-blooded Pinay.

And you have probably heard some of his band’s amazing music.

way to go nick! although i wasn't able to guess who he is, it still makes me proud to be pinoy. i'm really glad that the blog entries have been more frequent than usual. hope to read more and all the best!

man, you have to feed us more... i enjoyed reading your stories. more please.

my friend who works in London as an elevator operator recently met Kirk Hammett and told me what a wonderful guy he truly is.

when asked about the filipino dishes he eats, he replied " adowboh".

i really envy your writing & your style.. really worth reading.

perhaps another untold story in a week's time? lolz

Nick, you haven't posted in a while. Please post, I miss your stories!

hi nick! i just finished reading all 21 entries :) i can't wait for the next. i keep thinking though what suddenly made me addicted to your stories, i have never been a showbiz person. it must be because of your unique and intelligent writing style. Keep it up!

can't wait to find out who could be that Girl Gone Wild...

hope the next feature comes out soon..

I had read everything on your blog and i'm always checking if you already post another exciting juicy article! I was hooked with you're stories and it's truly amazing!

You're an unbelievable writer.

i really love this blog! proud to be pinoy!

At last, I found this blog again! I first heard of this blog around late 2007 when a friend forwarded me one of your Untold Stories. I think it was Lea's.

Among the stories here, I particularly like your take on Pinoy Unsolved Mysteries. It was intriguing how you previewed it as the story of how an award-winning actress' alalay became more famous than the actress herself.

Hope to hear more stories from you. :-)

I've read some of your earlier stories through a forum and a chain email but sadly, neither you nor your site were credited in both. Thank God I finally found it. I read all 21 posts in one go (even those that i've already read)! Really good.

my friend, a metallica fan, has been telling me that the lead guitarist is pinoy. didn't know he was born in st luke's though.

i am waiting (fingers drumming) for the next one....
been a while-im totally hooked-line and sinker!-to the guessing game..i wish i had found out about this sooner :)

when is the next one nick? looking forward to it. happy holidays!!!

nice blog sir. so informative. ive received an email before about the untold stories, i never knew it came from this blog. hopefully more to come. keep on blogging.. thanks.

This is the first time to read one of your blogs.I really enjoy it and I'm so proud of you of course I'm so proud of being Filipino too.Nice to know that there is a Filipino making other countrymen informed and well thought regarding to our country stories.Good job.Keep it up...

nice i learned a lot out of this blog.. thank you...i love to subscribed for more..

actually St. Luke's Hospital in San Francisco not in the Philippines